Analytical data shows that the latest target of the hacktivist group, Anonymous seems to be the Bored Ape Yacht Club (BAYC) NFT collection. On August 14, the group posted a video on Twitter promising to investigate different allegations against BAYC.

More particularly, Anonymous is considering the accusation of simianism, racism, occultism, and Nazism against the major NFT collectible. Nevertheless, NFT Twitter appears worried and questions the authenticity of the video. Here is what to know about the Anonymous group’s message for BAYC holders.

What Is Anonymous Group’s Message For BAYC Holders?

In the video, Anonymous stated that BAYC NFT traits have been accused of mainly involving simianism, racism, pedophilia, and occultism.

The group also stated that while they are now aware of the responses from Yuga Labs, they have not discovered anything “labeled as unrefuted”. “Anonymous aims to take the time to start a discussion about the BAYC collection:

We don’t believe in half measures and want to be thorough with our investigation.”

Anonymous also stated that the investigation against the heinous accusations” may take many months:

“BAYC collectors and enthusiasts, we feel empathy for what you may be going through right now. Even just allegations can be truly unsettling but the thought of even one of these allegations being true, must be intolerable to think of.”

These accusations against BAYC began in April 2022 when Ryder Ripps’ alleged that Yuga Labs founders have extensive links to alt-right 4chan meme culture. He insisted that the BAYC collection is racist and then went on to liken the BAYC logo to the Nazi Totenkopf emblem. He also set up a website known as gordongoner.com to explain the issues with BAYC.

While responding to this matter, Yuga Labs unleashed many statements denying the accusations. Moreover, the company filed a lawsuit against Ryder Ripps for trademark infringement, false advertising, misleading customers, and unjust enrichment. 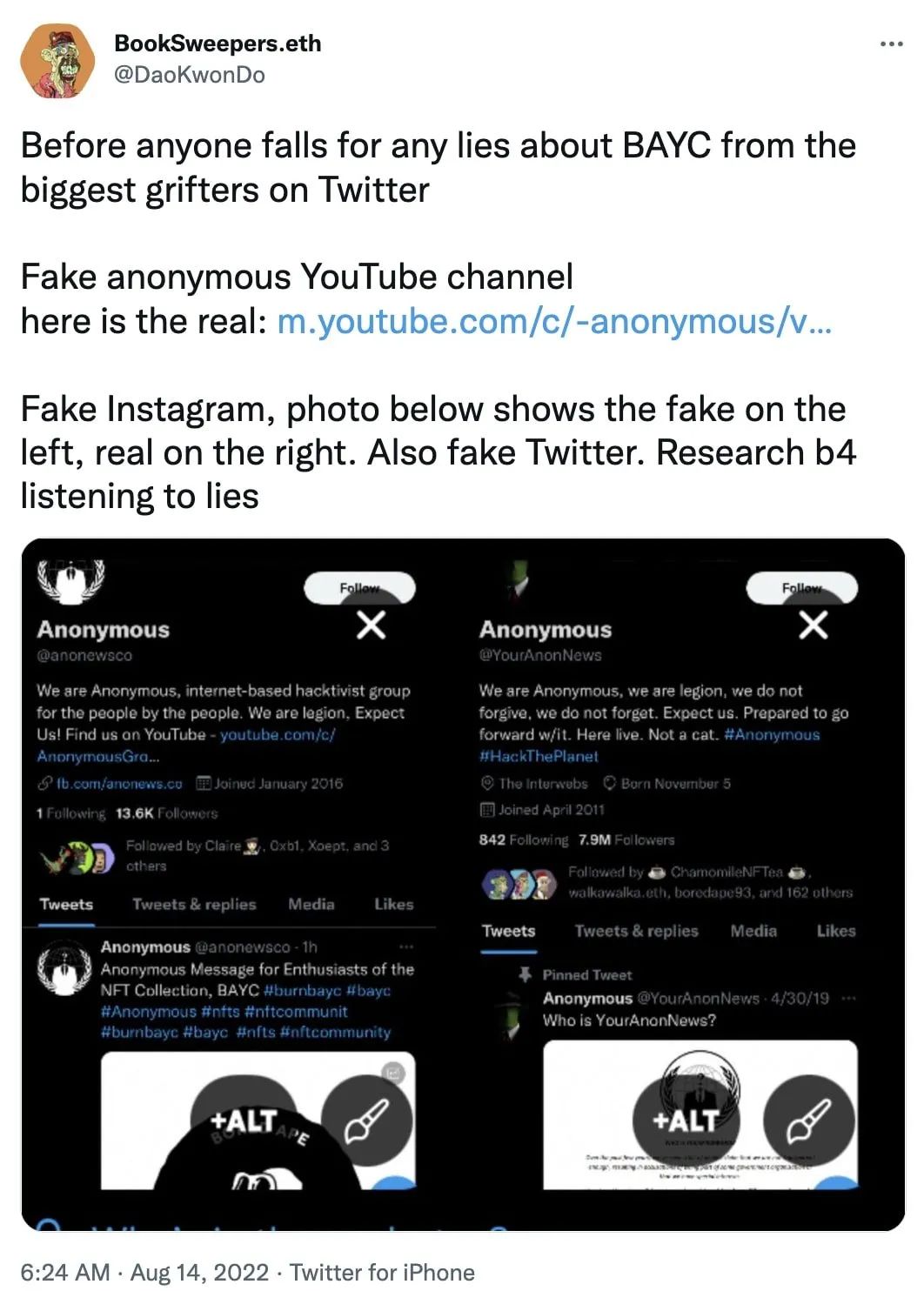 Is It The Anonymous Group?

Moments after the Anonymous group’s message for BAYC holders, most of the NFT users have now come forward to question the validity of the video. For example, BookSweepers insinuated that the Twitter account that posted this video, and its linked Instagram and YouTube pages, are phony.

Early this year, the actual Anonymous Twitter page also called out a DeFi token that the fake account introduced several months back. Moreover, they added that they are not on TikTok, Facebook, and YouTube. But, early this month, an Anonymous verified Facebook page published a now-deleted post praising Ryder Ripps and Pauly Cohen.

Some of the community members have also claimed that the video is created by Ripps himself. Jay-Albert.eth tweeted:

“From what I’ve seen, they don’t record camera angles from different views of the speaker. He also sounds similar to Ryder and the team to me. I think it’s fake.”