Boomers are worried about volatility, but millennials are filling their pockets with cryptocurrencies.

A survey revealed that one in five Australians believe that cryptocurrencies are the key to home ownership as confidence in traditional economies ebbs.

The survey, conducted by the Kraken cryptocurrency exchange, found that a growing number of young Australians are becoming discouraged by traditional investment options.

Almost a quarter of respondents expressed concern about the reduction in purchase value in traditional economies.

According to the survey, nearly 40% of Millennials – respondents born between the early 1980s and mid-1990s – said cryptocurrencies are a solid alternative for being able to buy property in the future.

Furthermore, 31% of Generation X respondents – Australians born between the mid-1960s and early 1980s – also believe that cryptocurrencies are better investments than real estate. 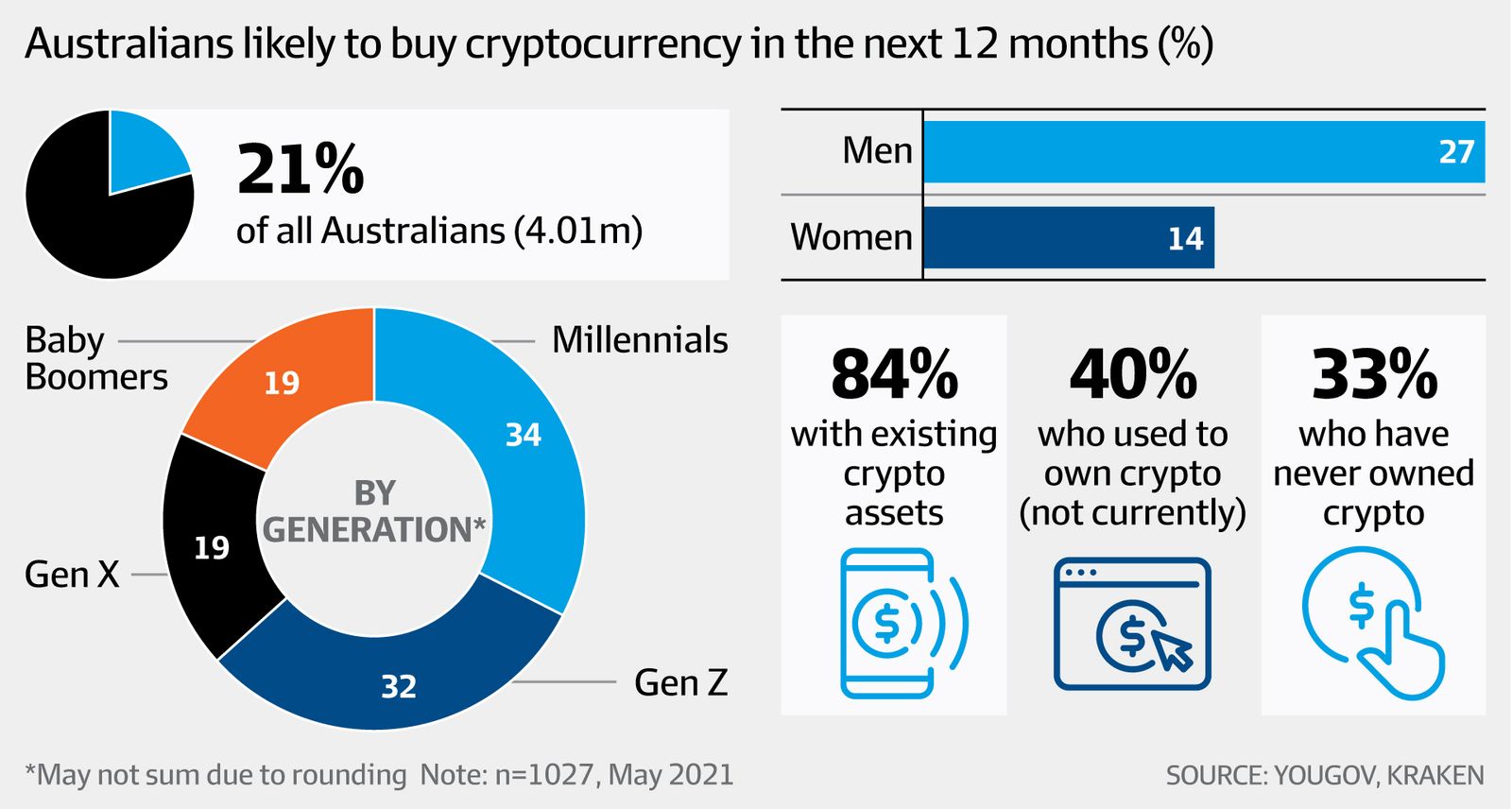 In total, only 24% of Generation Z participants – those born between the late 1990s and 2010 – echoed this sentiment.

Nearly half of the baby boomers surveyed — those born between the mid-1940s and mid-1960s — did not invest in cryptocurrencies, citing concerns about volatility.

Kraken Australia Managing Director Jonathon Miller commented that while Australia lags behind the United States in terms of adoption, Australia is a fast-growing market for cryptocurrencies that is largely driven by Generation Y demand:

“Australians still maintain some conservative attitudes towards investing. Property has long been a cultural norm and high on most investors’ wish lists, but as affordability remains an issue, we’re seeing more young people looking for other options to increase wealth. ”

He added that it is the younger Australians who are changing the dynamic and are hoping the broader market will come up with the idea of ​​investing in digital assets.

“We are confident that as more investors look to diversify their portfolios and look for investment opportunities outside of traditional offerings, we will see cryptocurrency gain ground at APAC.”

Jonathon Miller also emphasized the need for greater education about cryptocurrencies in Australia, and it appears that more is needed. Last month, the Cointelegraph reported that more than half of Australian respondents to a different poll think Elon Musk invented Bitcoin.

After all, who created Bitcoin?

Satoshi Nakamoto, a Japanese pseudonym, initially represented an anonymous person or group of people who created the original bitcoin protocol in 2007. Before his “disappearance”, Nakamoto was active both posting technical information on the BitcoinTalk forum and modifying the bitcoin network.

Being responsible for creating most of the protocol, accepting rare contributions from third parties. In April 2011, Satoshi informed a bitcoin contributor that he would have “departed for new things”.

On August 18, 2008 the domain “bitcoin.org” was registered, and in November the study Bitcoin: A Peer-to-Peer Electronic Cash System was published by Satoshi Nakamoto on a cryptocurrency mailing list.

Nakamoto implemented the software behind bitcoin as open source and released it on January 3, 2009. In the same month, the network was created when Nakamoto mined the first block of the blockchain, known as “the first block”. In the first block it was written:

The Words Jan 03, 2009 Chancellor on brink of second bailout for banks.

Bitcoin is considered the world’s first decentralized digital currency, constituting an alternative economic system, and responsible for the resurgence of the free banking system.

“I would be dedicating my life to Bitcoin and other cryptocurrencies”

If he weren’t ahead of Twitter and Square, Jack Dorsey would be dedicating his life to bitcoin and other cryptocurrencies. That’s what the president of the social network said at the Bitcoin 2021 Conference in Miami this weekend.

“Bitcoin changes absolutely everything. I don’t think there’s anything more important in my life to work on these days,” said Dorsey.

For the executive, cryptocurrencies have a more democratic characteristic than traditional money, being more inclusive and capable of covering the most needy sectors of society. They would also be an alternative to currency depreciation and could streamline international money transactions.

“I don’t think there’s anything more powerful to empower people around the world,” Dorsey said. Not by chance, he and rapper Jay-Z signed a partnership in February for a new bitcoin donation, which will focus on the development of cryptocurrency in India and Africa. The initiative was funded with an initial investment of 500 bitcoins, valued at approximately $23.6 million.