Ethereum is a blockchain fundamentally used to support the second largest cryptocurrency by market capitalization in the world after bitcoin.

Like other cryptocurrencies, ether can be used to send and receive values ​​on a global scale without a third party watching or interfering unexpectedly.

The negotiation of values ​​is the main use of the Ethereum network blockchain today, often through its native token, ether.

But many of the developers are working on the cryptocurrency because of its long-term potential and their ambitious vision of using Ethereum to give users greater control of their finances and data through decentralized applications, in addition to using the blockchain to host smart contracts .

The ambitious idea – which sometimes leads the Ethereum network to be called a “world computer” – has suffered its share of criticism that this ecosystem is unlikely to work.

But if this experiment goes as planned, it will generate applications very different from Facebook and Google, where users trust their data, whether they know it or not.

Ethereum enthusiasts are looking to return control to users with the help of the blockchain, a technology that decentralizes data so that thousands of people around the world receive a copy.

Developers can use Ethereum to build applications that don’t need a centralized control to function (dApps), which means that a user’s data cannot be tampered with by the creators of the service.

The Ethereum network was first proposed in 2013 by developer Vitalik Buterin, who was 19 at the time and pioneered the idea of ​​expanding the technology behind bitcoin, the blockchain, beyond transactions.

While the Bitcoin network was created with the goal of disrupting online banking and everyday transactions, the creators of Ethereum are looking to use the same technology to replace the participation of third parties on the internet – those who store data, transfer mortgages and track complex financial instruments.

These applications help people in countless ways, such as when they walk a path to share vacation photos with friends on social media.

However, they have been accused of abusing that control by censoring or accidentally leaking sensitive user data in hacks, to name a few examples.

The platform was officially launched in 2015, making the idea of ​​the Ethereum network real and working.

Ethereum and a decentralized internet 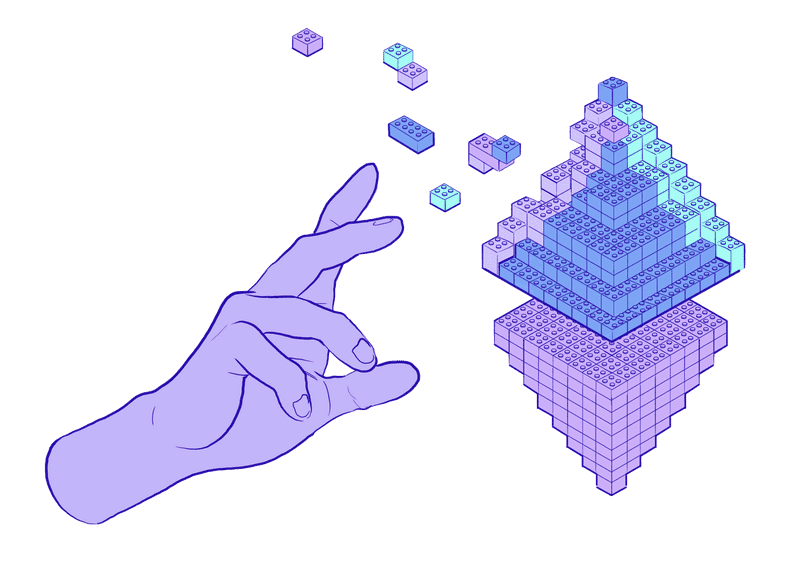 Today intermediaries are everywhere. Behind the scenes they help us perform all kinds of digital tasks.

Gmail, for example, helps us send emails. Paypal, sending money to a friend.

This means that our data, financial information and beyond are all stored on other people’s computers – on clouds and servers of companies like Facebook, Google or PayPal.

This structure can be problematic, according to proponents of decentralization. This implies less direct control for users, making room for opportunities for censorship, where the intermediary can interfere and prevent the user from any action, whether buying a certain stock or posting a certain message on social media, or all of these together.

The idea of the Ethereum network is to change the way these applications work on the Internet today, rewarding users with greater control by replacing intermediaries with smart contracts that automatically execute rules.

How is the Ethereum network different from Bitcoin?

Ether was inspired by bitcoin, both are cryptocurrencies. Ethereum uses the same technology behind the Bitcoin network, the blockchain, which uses a shared, shared ledger, logbook to decentralize the network, so it won’t be under the control of a single entity.

While the Bitcoin network is fundamentally used to store and transfer values, the idea behind Ethereum is to decentralize other types of applications and services.

Why is Ethereum called the “world computer”?

Many advocates see the Ethereum network as a “world computer” that could be responsible for decentralizing the internet.

With the Ethereum network, centralized servers are replaced by thousands of so-called “nodes” run by volunteers around the world, thus forming a “world computer”.

The expectation is that one day, anyone anywhere in the world will be able to use it.

How does an application work on the Ethereum network?

Scrolling across the screen of a typical app store you will see a variety of colored squares representing everything from banks to messaging apps.

The long-term vision of the Ethereum community is to develop applications that look exactly like these, but that work differently behind the scenes.

In short, the goal is for applications on the Ethereum network to return control of data in these types of services to users.

What are the next steps for Ethereum?

It’s worth noting that Ethereum suffered from healthy skepticism, meaning that for some the network is still far from scalable, meaning it can’t support many users at the moment, ruining the idea of ​​a “world computer” that would be no match to Google, Facebook and other centralized platforms.

Ethereum 2.0, which was released on December 1st, 2020, aims to solve some of these issues.

Other scalable technologies such as Raiden – which has been working for years – could help with the scalability issue as well.