Fancy Birds is a new play-to-earn (P2E) nonfungible token (NFT) game that seems to be taking the industry by storm. The blockchain game hopes to emulate the success that was recorded by the addictive mobile phenomenon Flappy Bird.

The team behind Fancy Bird said that it is drawing its inspiration from the addictive success of the 2013 mobile phenomenon Flappy Bird game. So far, the new project has already attracted the support of some of the biggest names in the decentralized finance (DeFi) world.

Stani Kulechov from Aave, Kain Warwick from Synthetix, and Tyler Ward from Barnbridge are the top names that have supported the Fancy Birds project. Others include 0xmaki from Sushi and angel investor Santiago Santos (ex-ParaFi Capital). All of them joined a pre-seed round earlier in the week for the upcoming Fancy Birds project that is scheduled to launch in nearly one month.

What Is Fancy Birds?

By description, Fancy Birds is a single mobile game that has 8,888 randomly generated NFT characters. These characters are minted originally with custom features. They fight through different levels to earn their spot of becoming “the fanciest bird in the nest”.

In this arena, the successful players earn up to 40% of the Fancy (FNC) token supply. Later on, the upgrades will see the game launch multiplayer mode. The team says that it will come with staking, breeding, and tournaments to engage the participants.

For now, they are in discussions to launch Fancy Birds on Ethereum NFT scaling layer 2 project Immutable X. As is the case with several of the other possibly big meme projects, this game appeared to spring out of nowhere on Twitter. It came up several weeks ago after Illuvium founder Kieran Warwick wondered ‘loudly’ on Twitter:

“How has someone not created a play to earn Flappy Bird?”

“It’s not complex, just super addictive and a lot of fun, and at its peak, it had 100 million users daily. Turns out someone is building it and it’s in beta now.”

After the project’s development started, Warwick came on board as an advisor. He helped in organizing the pre-seed. Currently, the team is now reaching out to Delphi Digital, Framework Ventures, and a16z for the next round.

The growing project reminds investors and gamers of Barnbridge founder and Flappy Bird investor Tyler Ward’s Non-Fungible Pepe project. That project was memed into existence by a group of the same people earlier in 2021. They made several millions in a few weeks before they transformed into Universe.xyz for copyright reasons.

Warwick is sponsoring his Illuvium project. The upcoming blockchain P2E game is now growing exponentially with more players showing their interest in the interesting project. In that context, the price of the ILV token has surged from $33 in June 2021 to around $800 as of October 21. So far, it has accumulated around $500 million in market capitalization and has 200,000 Discord members.

Warwick advised the Fancy Birds team to set up community governance based on the models of Synthetix and Illuvium. 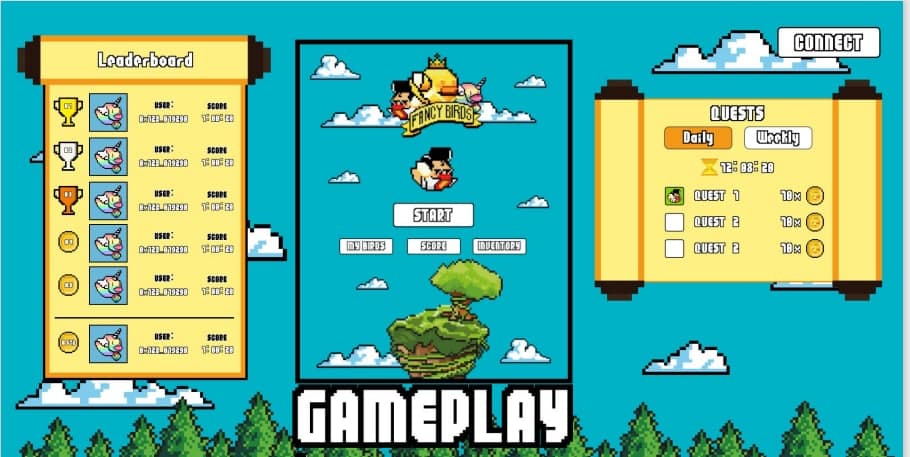 “The team has been really receptive, they’re going fully decentralized with a DAO first, and a governance council; with 100% of profits (collected platform fees) going back to stakers. We reworked the tokenomics so it makes a lot more sense so I think they are poised to be really big players.”

Illuvium has become an official partner of Fancy Birds, and fans can use an 8-bit version of the game’s main character Rhamphyre to play in the game. Fancy Birds aims to appeal to the massive P2E community in nations like the Philippines. Warwick stated:

“It’s tapping into the same thing as Axie Infinity and it’s on mobile so anyone can play so I’m expecting a tonne of players to pile in.”

There's just a few weeks left of production for the gameplay trailer. We could not be more proud of the amazing work all our Core Contributors are putting in to bring the trailer to life.

Thank you all for your patience! You won't be disappointed. 🔥 pic.twitter.com/Ek8Btl0Nn3

In the meantime, Warwick confirmed that the Illuvium team is ready for the launch of its first trailer that shows the world how this game works. He concluded:

“We’ve obviously built up a ton of hype, we have nearly 200,000 people in Discord now; and things are going really well. But the one thing that we haven’t shown is our gameplay trailer.  There’s going to be a lot of people that are waiting on the sideline, and it should help us to get them over the line to say; ‘This is real. This is actually happening. It is a triple-A game’.”