Sorare is described as a fantasy football game that is powered by the blockchain. In this game, users enter tournaments, trade players, and even compete for prizes worth thousands of dollars every week.

The NFT game has a fantastic process since its card supply is limited. Hence, owning the best players is highly profitable, both on the pitch and when trading. There is a limited supply of cards that never expire for every season.

The Sorare tournaments are free to enter. This means that there is no limit on the number of tournaments that one can enter. That concept is relatively new. However, it has exceeded the expectations of the developers, attracting a growing number of gamers.

Analysts say that the use of official blockchain cards, the level of prizes, and the support the game gets from major gaming brands like Ubisoft, ConSensys, and Opta puts Sorare way above the competition. With such a huge level of backing, this fantasy football franchise has got the endorsement of more than 200 football clubs and counting.

With the momentum that Sorare has gained in 2020 and 2021, it was already expected that the game would command mainstream attention. Here are the tips and tricks you can use to succeed while participating in the Sorare NFT game.

Sorare become the first official game to use the Sorare branded blockchain playing cards. Blockchain technology enables players to validate their digital player cards similarly to the way playing cards were collected in the 1990s. Therefore, players buy, sell, and trade their cards with other users online.

You need to set up a collection comprising of the best cards available to succeed. Enter tournaments and try to win prizes like cash or cards. These cards can be bought and sold on the transfer market to make profits accordingly. The higher the players are ranked, the better the prizes they attract.

The game moved to Ethereum in 2019 after LOOM made a move to digital commerce solutions. This shift did not slow Sorare’s momentum. West Ham United, Juventus, PSG, Barcelona, and Roma started using Sorare. The Belgium Red Devils, the France National Team, and the German team have also joined.

This blockchain game even stirred up massive engagement with player cards for Joao Felix, Antoine Griezmann, Ousmane Dembele, and Ronaldo. They are still working to attract more teams and players.

The gameplay features the creation of a first-team. Players need to sign up to Sorare. After signing up for the first time, the player is given 10 common cards immediately. The first team is entered in the Rookie League reserved for the new players known as managers.

Sorare SO5 has many features in the early game that enable you to build your skills as a manager. Bidding for players is exhilarating and easy to do. You have to enter the Transfer Market to find players up for sale. That is where you get players available for bidding. The highest bidder gets the player.

If you do not like bidding, Sorare has a market where traders list their cards for sale in a ‘Buy it Now’ listing environment. There is a simple pricing structure to get the card. Players just press the transfer market and then select the ‘Manager Sales’ option to see all the cards that the other managers are selling. Prices are fixed with every listing active for two days.

On October 11, 2021, reports emerged that the United Kingdom Gambling Commission had stated that Sorare may need to register as a licensed gambling company. The fantasy soccer and digital collectible platform was warned in an October 8 consumer information notice that its business:

“operates outside of the gambling regulations that a licensed operator should comply with, and consumers need to take this into account when deciding whether or not to use the platform.” 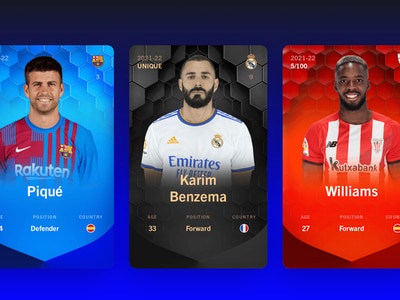 The notice stated that the Gambling Commission is actively reviewing where Sorare needs to have a gambling license. While the platform offers no traditional form of sports gambling, the speculation involved in their digital trading cards whose value is impacted by player performance breaches the line of categorization.

Sorare responded in its official statement regarding the investigation:

“We are confident that we do not offer any form of regulated gambling, and we have already confirmed this matter with legal experts since the company’s inception. Our team will always engage and have an open dialogue with authorities who reach out to us to learn more about our game. We believe this is the responsible way to grow our game and community globally.”

In September, the Paris-based NFT giant firm raised $680 million in a Series B funding round. This funding was completed at a valuation of $4.3 billion in September.