Dark Country NFT card game seems to be taking the gaming world by storm. In late April 2021, the team announced that the revolutionary trading card game would be available on Flow blockchain.

According to their announcement, building on Flow was a major priority since they wanted to join one of the fastest-growing blockchains globally. By description, Dark Country is a nonfungible token trading collectible card game that is based entirely on the American Gothic setting. It is inspired by the all-time classics like Hearthstone and Magic: The Gathering.

This game is what many trading card game collectors have been enjoying and loving to use for several decades. At its core, it comes with new gameplay possibilities and platforms that are powered by blockchain technology.

The project was in development for nearly two years, and its Alpha version was available for PC and Mac via Itch.io by April 22, 2021. So far, at least 55,000 player-vs-player games have already been played. The community keeps growing with regular tournaments, new gameplay, and feature updates, enhanced with fresh card sets releases.

Many tournaments have been hosted on the platform with the last week of the Big Tournament Stage 2 happening this week. The team said that they will stop accepting submissions from players on October 10, 2021. One day later, they will finalize the Rating and select the TOP8 players who will play in the finals.

Sunday the 10th of October we’ll stop accepting submissions from players and on Monday the 11th we’ll finalize the Rating and choose the TOP8 players that will play in the Finals.

In the Dark Country, one can pick any of the four races, create a deck of cards with creatures, items, and spells to use against opponents online. A player can only win after they manage to reduce their opponent’s health to zero. Here is how it feels to battle in Dark Country.

The main feature that sets Dark Country apart from the rest of the NFT card games is the existence of Dark Country Lands. The ‘Lands’ are developed across many blockchains and they are perfectly designed to collaborate, play, and fight across several worlds. Every Dark Country continent is powered by a different blockchain for example FLOW or WAX.

The card game comes with an option to set up multiple continents on every blockchain. Notably, these lands are the biggest game assets that the players can own within the Dark Country space. They give access to quest zones and even create Shadow Dimes. These dimes are an in-game currency for the players and landowners.

Every land has a critical influence parameter that depends on the land’s rarity, plot development status, position, and any available hosted activities. The bigger the influence, the more Shadow Dimes go to the Landlord.

The introduction of Lands creates an incredible new gameplay layer to Dark Country, integrating the existing card game mechanics to create new Play2Earn experiences for the Landlords and the players. 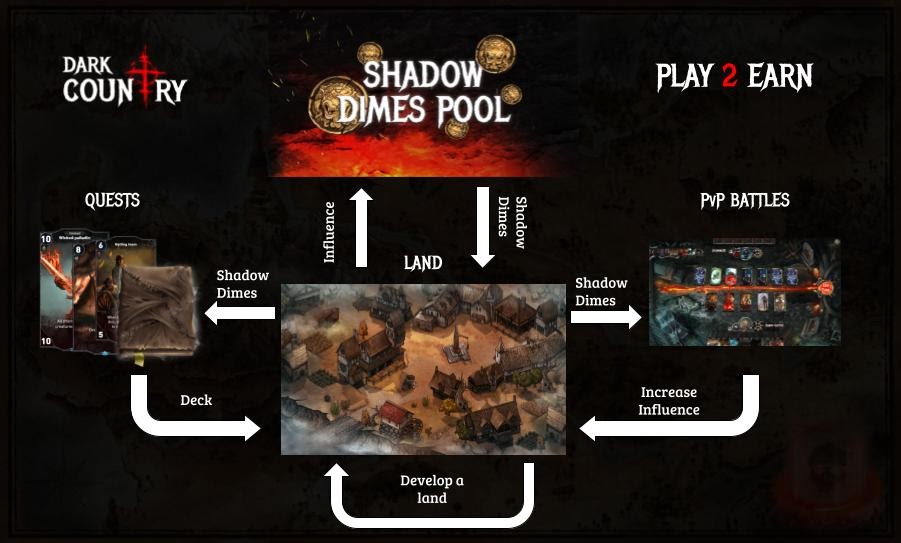 Card game PvP battles happen on Land plots, rewarding Landowners and players with Shadow Dimes for the critical in-game activity. The primary goal of a Landlord is to have the biggest Influence level on a Land plot. That is achieved by making his Land plot the most attractive for the players hosting various game activities like PvP, coupled with land development with buildings.

The original Land-based gameplay happened through sending a ‘Deck’ on a quest to a selected Land plot. A Deck is a set of 5 or more Dark Country cards.

Dark Country offers 4000 land plots for the Genesis Dark Country Land Sale on Flow. Notably, that was the first-ever land sale that happened on this platform. Lands are placed within various zones of a rarity on the map. These zones include Legendary, Epic, Mythical, Common, and Rare. 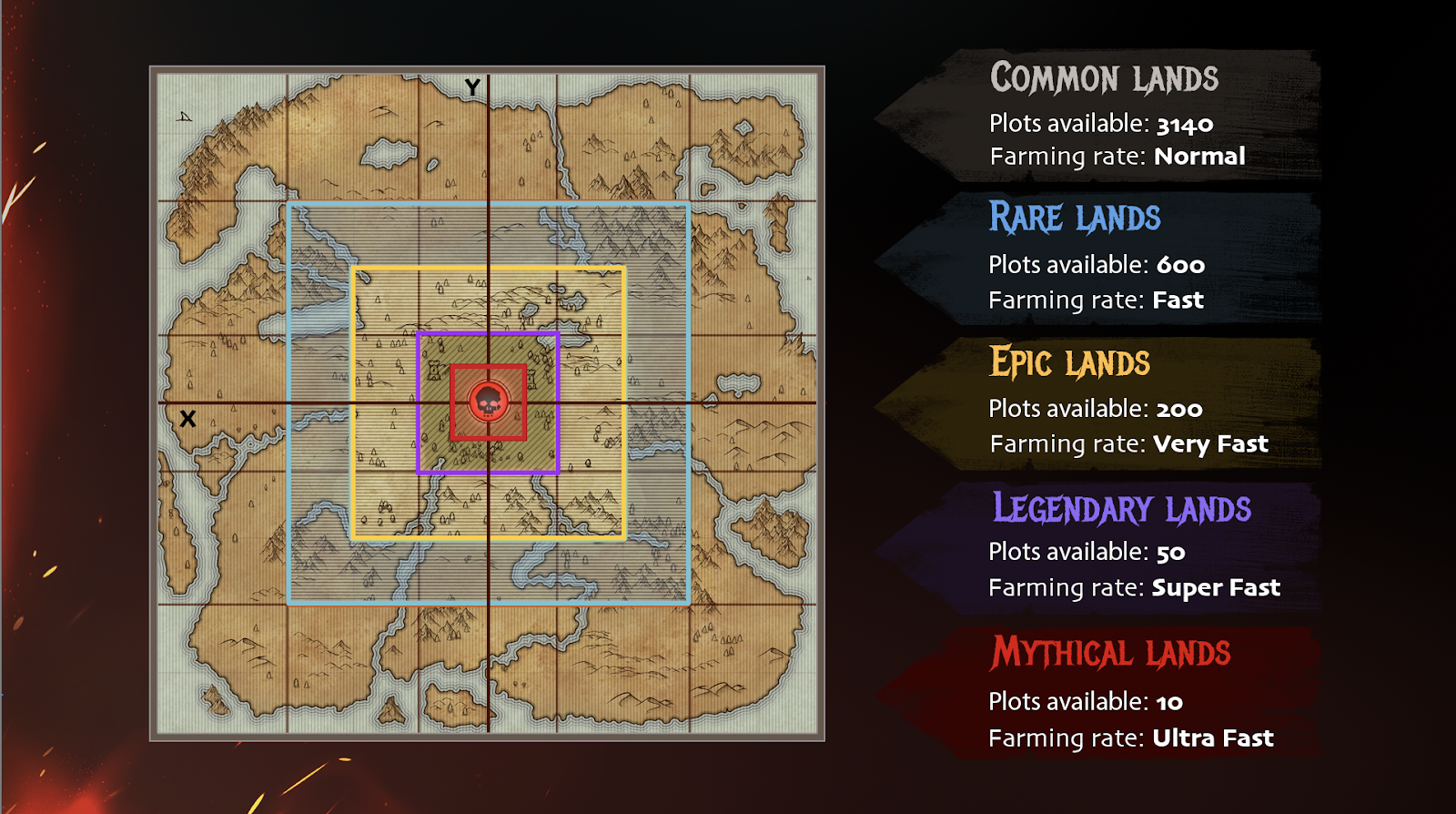 Each of these zones has an influencing parameter subject to the position in relation to the map center. This criterion affects the land’s farming capabilities and is calculated subject to the zone rarity and position depending on the central point.

In the first presale drop, three types of Land packs were available. They included the Governor’s pack (the largest), Mayor’s (middle-sized), and Rancho (the smallest). Every pack comes with a Land Plot card and cards from a brand new Vampire set.

The higher tier packs offer increased opportunities for the Dark Country players to get a land plot with a higher rarity.

Interestingly, every land plot has a unique name.

As a welcomed bonus meant to commemorate launching Dark Country on Flow blockchain, the team created 50 distinct vampire cards offered within the Land Sale packs exclusively for the Flow users. Users participated and the lucky players have won these NFTs.

Analysis and reports show that the Dark Country Lands NFTs are available for purchase with the Flow tokens through the Blocto wallet.