It all started when in September last year, UNI tokens were distributed to users who have used the Uniswap protocol in different ways in the past and continued with the new ability to convert Reddit Moon (XMOON) in the DAI coin.

As for the MOON to DAI conversion process, it’s gotten a little too confusing lately. So it is our duty to create an XMOON walkthrough (a guide for non-English speakers) that can help people through this process.

But before we start, we’ll try to understand what MOON tokens are. But if you already know everything about it, you can go directly to the section “Converting MOON to DAI”.

What are MOON Reddits (XMOONs)?

Reddit introduced a new feature known as “Vault” in May 2020. The Reddit vault is essentially an Ethereum-based crypto wallet, which is embedded in a user’s Reddit account and its purpose is to store new subreddit-based community tokens. The most intuitive subreddit to start this experiment with was r/CryptoCurrency and therefore the first Reddit community token was launched for this subreddit as r/CryptoCurrency MOONS.

This new token, known as the MOON, was distributed to previous participants of the r/CryptoCurrency subreddit every 4 weeks. According to Reddit “MOON tokens are a new way to get rewarded for your contribution on r/CryptoCurrency. MOONs can be requested in the new section called Vault of the Reddit app for iOS or Android! Once requested, they become our subreddit property. Furthermore, they can be transferred, used and spent in r/CryptoCurrency.

Designed on Ethereum’s Rinkeby testnet, it was initially not possible to trade MOON on secondary markets, which made it difficult to set a price. But soon users came up with a workaround, which we’ll talk about in this in-depth article.

The appearance of a new utility

On September 23, a thread titled “New Moons feature – convert to Coins!” was created in the r/CryptoCurrency subreddit and described how to convert MOON to Reddit token. Reddit tokens are used to assign posts and comments. They are not new, as users have been able to buy these Reddit tokens using fiat money for a while. ‘of time.

Out of the blue, the MOON utility arrived. This allowed for the conversion of MOON Reddit coins into a real value coin. Therefore it is not surprising that money markets have been created that allow you to convert MOON, which is a testnet cryptocurrency into mainnet cryptocurrencies that have real value.

How to get MOON tokens? 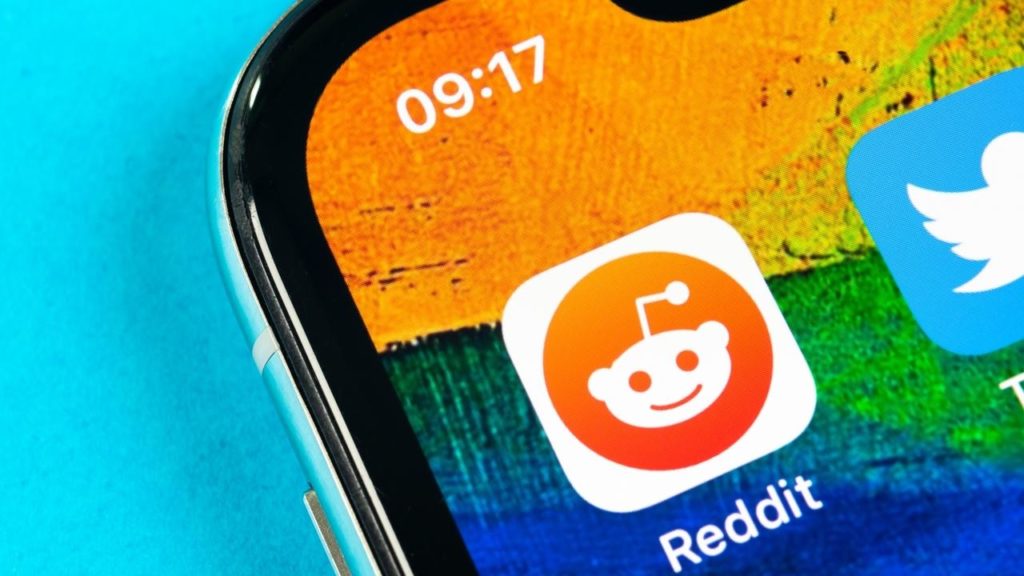 Before we find out how to convert the MOON token to DAI, let’s understand how you actually get MOON. As mentioned above, tokens are distributed monthly based on the individual contributions (comments, posts, etc.) that people make on r/CryptoCurrency. Reddit karma provides a basis for measuring people’s contributions, but the final decision rests with the community.

Initially, 50 million MOON tokens have been distributed in the subreddit to date based on Reddit karma. The amount distributed each subsequent month will start at 5 million and decrease by 2.5% with each cycle, so that the total number of MOON distributed over time will approach a maximum limit of 250 million.

What can be done with MOON tokens?

Once Redditors receive MOON tokens, they can use them to:

Purchase a special subscription to the r/CryptoCurrency subreddit, which costs 1,000 MOON per month. Benefits include special loyalty badges and the ability to reply using animated gifs and emojis, among other things.

Once users spend MOONs on Reddit, the protocol removes them from circulation. This means that the amount of MOON available to users should decrease over time, increasing the value of the remaining tokens, hopefully so.

However, half of all MOON tokens burned each month will be reintroduced into the economy the following month, ensuring that there will always be a new MOON to distribute even after the 250 million tokens have been released.

How to convert MOON tokens to Crypto / Cash

To complete this process, here are the main things you need based on our research findings and a shared explanation on Reddit:

To do this, you need to get the recovery phrase provided in the Reddit vault (available on the Reddit mobile app. Select “Recover Wallet” on Metamask during setup to reset your account with the phrase).

Alternatively, you can use the submit button on the Reddit Vault app, then send the tokens from the app to your Ethereum address on Metamask. This is the option we used.

Once the transaction is complete, switch networks on the MetaMask app from the “Ethereum network” to the “Rinkeby testnet”.

Note that your tokens will not be immediately visible at this point, you still need to add MOON using the custom token option on Metamask.

Once you’ve entered it, you can proceed to the next step which involves converting MOON to XMOON.

To complete this transfer, you will need some Rinkeby Ether to cover the fees. You can get a free Rinkeby Ether by completing the faucet at https://faucet.rinkeby.io/ or https://rinkeby.faucet.epirus.io/.

If none of these work, find someone who holds Rinkeby ETH and ask them to send you some. In our case, we reached out to the generous Redditor on the first guide we read on Reddit on how to trade Reddit tokens.

Step 2: Convert MOON to xMoons and then DAI to xDAI 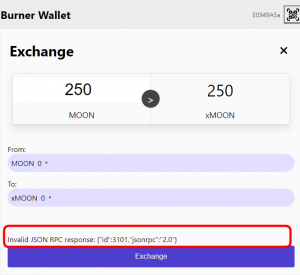 To do so, buy DAI from Binance or Coinbase and send it to your MetaMask ETH address. Once you’ve done that, go to http://moon-exchange.herokuapp.com/ and link your Metamask wallet. This option is available on the home page of the site if you are using it for the first time

Then, use the exchange interface and select exchange MOON for XMOON. At this point something could also go wrong and you might get an error message like it did to us. Don’t panic! It took us literally 20 minutes to convert MOON to XMOON and confirm the first time on our wallet.

For some users, however, the transaction is instant and you can see the XMOONs on your dashboard within 2 minutes of confirming the transaction on MetaMask and waiting for the Exchange process to complete.

Anyway, you should have XMOON tokens equivalent to the amount of MOON you converted available on your dashboard after a few minutes.

Then, convert DAI to xDAI using the same “Exchange interface”. Click the Swap button at the bottom of the page after entering the value. 2 DAI should be enough for the whole transaction.

Note: the above option to swap Dai for Xdai at http://moon-exchange.herokuapp.com/ is not is more available. Alternatively, you can use https://dai-bridge.poa.network/ to exchange DAI with XDAI. A minimum of 10 DAI is required for conversion, although not all will be used. 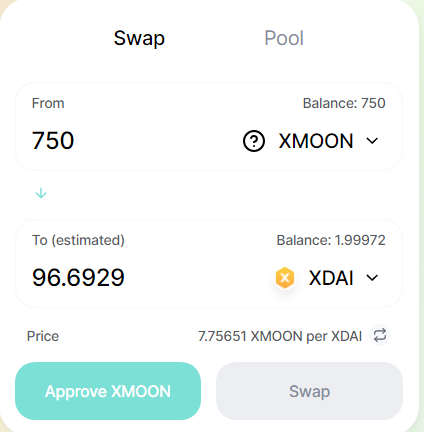 Once you have XMOONs visible on your dashboard and xDAI, you must exchange these XMOONs with xDAI via fork Uniswap, exchange Honeyswap (https://honeyswap.org/) .

Visit the above URL and link your MetaMask wallet.

Once the trade is complete, go back to https://dai-bridge.poa.network/ and trade xDAI with DAI. Here it is! Send your DAI to Binance or Coinbase and sell it for BTC or fiat currency.

What can I do with the newly acquired DAI?

You can earn interest on your DAI using a DeFi protocol. You can trade your DAI into any cryptocurrency you want using any exchange. You can also cash out your DAI by converting it into fiat money using a dedicated service provider operating in your country.

We fully understand that the conversion process is by no means intuitive. There are many steps involved to successfully convert MOON to a mainnet currency such as DAI. Considering the extremely rapid pace of technological advancements in cryptography, cryptography could become obsolete very soon. In the meantime, I hope you have found it useful.

Why should I use MOON? 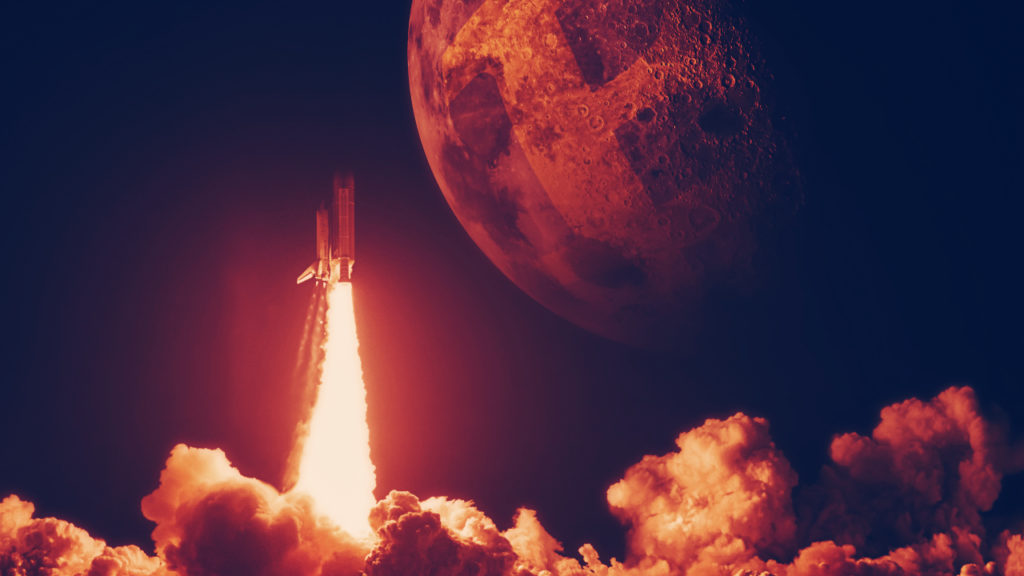 You may be interested in MOON if you want to play an important role in maintaining the r/CryptoCurrency subreddit or are already doing so. If you are already an active content creator on r/CryptoCurrency, you may want to consider creating a Vault to claim the MOON tokens you have earned to date.

Active users can also purchase MOON to tip their favorite content creators. Finally, you may be an investor who believes in the long-term opportunity of owning a crypto asset widely used by a popular community like Reddit.